An Arctic Safari on Wrangel Island

The overland safari is one of the best-known and most iconic travel experiences in the world today. Its popularity and fame are in part due to its conception around the art of photography itself; the wildlife encounter that simply must be shared. The safari sits as an experience for most bucket lists and is of course framed around the observation of the so-called ‘Big Five’ animals of Africa. The lion, rhino, Cape buffalo, elephant and leopard.

But the safari, as with everything in travel, has evolved as the appetite for discovery has widened. And in this blog, I take you to a place that is very far away from the ‘Big Five’ of Africa. A place that defines the phrase, ‘off-the-beaten-track, and one that is rarely seen at the dinner party photo tour. The extraordinary, Wrangel Island.

Described by naturalist and expeditioner John Muir (in 1881) as “This grand wilderness in its untouched freshness”, this extreme destination is as fragile as it is remote, and having escaped glaciation during the last Ice Age, despite its rugged and rocky appearance it is also a bonsai garden of some 400 plant species.

Wrangel Island, to give it some perspective, is roughly the same size as Northern Ireland and is located in the Arctic Ocean, between the Chukchi Sea and the East Siberian Sea. High in the Russian Far East, this fascinating isle offers a harsh and remote landscape, its closest neighbour the tiny Herald Island, around 60km away. Wrangel Island is the last known survival place of the wooly mammoth, which 4,000 years ago, could well have made our Arctic safari! Although amazingly, you can still see intact mammoth tusks here, a fascinating relic from a sanctuary of old, lying on the riverbeds or washed ashore, often still intact. 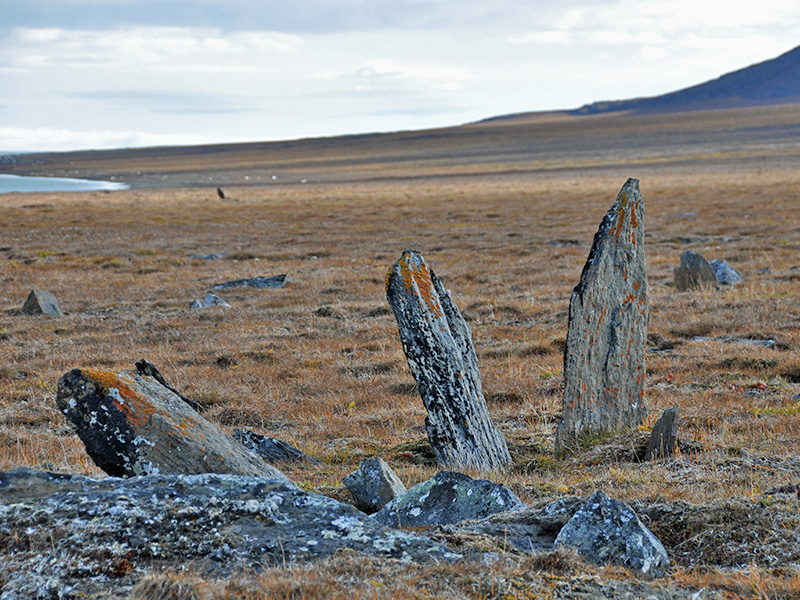 Wrangel Island is said to have just four permanent residents, although a small group of scientists conduct research here during the summer (It is an important location for monitoring climate change). However, it is the extraordinary and diverse wildlife, that we explore today and that marks it on the contemporary expedition trail.

Wrangel Island is often on the radar of Aurora Expeditions guests that have previously travelled to the Polar regions and are now looking for the next great adventure. But it’s also now a mecca in its own right for explorers and those passionate about seeing diverse wildlife in its natural habitat; seeing those places of the world that are truly ‘off the beaten track’ and unspoiled and those who simply wish to travel beyond the bucket-list. It is also the northernmost UNESCO World Heritage Site.

The wooly mammoth may have long since departed, but the ‘Big Five’ of this Arctic safari are very much still here and in numbers.

First on our safari is the endangered polar bear, and there is a story about this iconic and symbolic animal from the Island that I also like to share. On a visit some years ago, a group of expeditioners believed they could see a large flock of sheep in the distance. However, as they neared the shoreline, they realized that this gathering was in fact over 200 Polar Bears, including cubs, feeding on the carcass of a whale. To put that into perspective, this group, seen sharing a meal, represented about 1% of the entire global population of wild polar bears, so quite an extraordinary experience.

In fact, Wrangel is without question one of the foremost locations globally to photograph these beautiful creatures in the wild, having the world’s highest density of ancestral polar bear dens and seeing them living and going about their daily activities on dry land, rather than on ice. 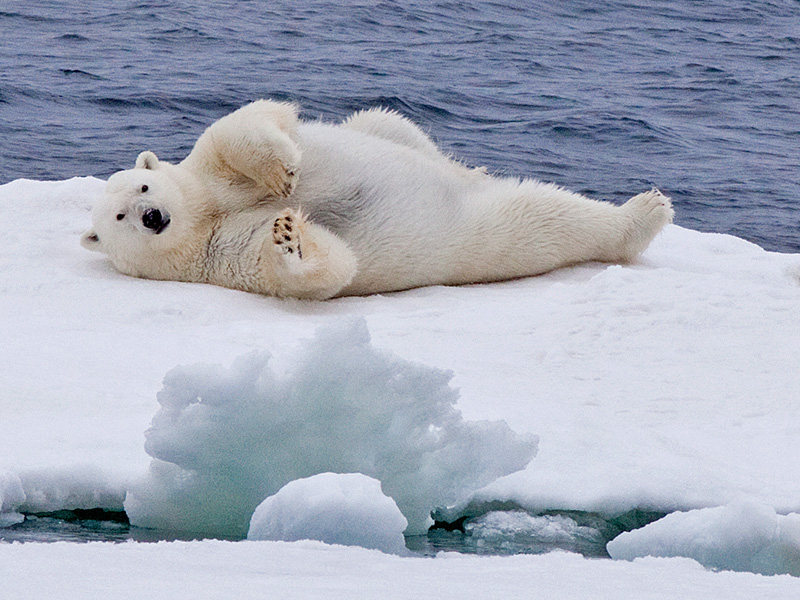 Next on the safari is the walrus. Wrangel Island is actually home to the world’s largest population of Pacific walrus. And depending on ice formation, up to 100,000 walruses have been known to gather in the Island’s coastal rookeries. The Walrus population is now recovering having been in decline, although its predator, the polar bear, is never far, and fighting between the two animals is often witnessed by expeditioners to the Island. The walrus sadly fighting for its own survival on such occasions. 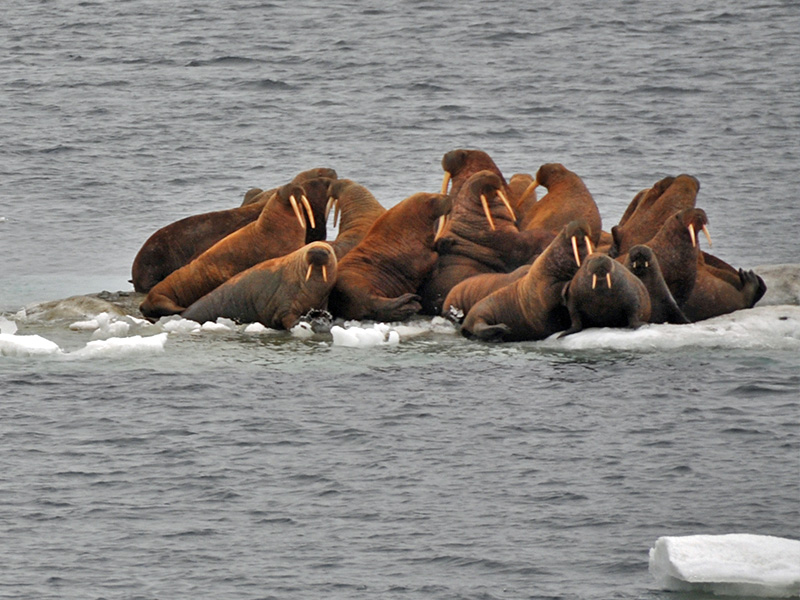 The Seasons mark stark contrasts on Wrangel Island, as embodied by the photogenic Arctic Fox. With its changing of coat colour by season, from white to brown and back, the Arctic Fox is a keystone species of Wrangel and also keeps the thriving snow goose population within sustainable numbers, playing its part in this isolated ecosystem. 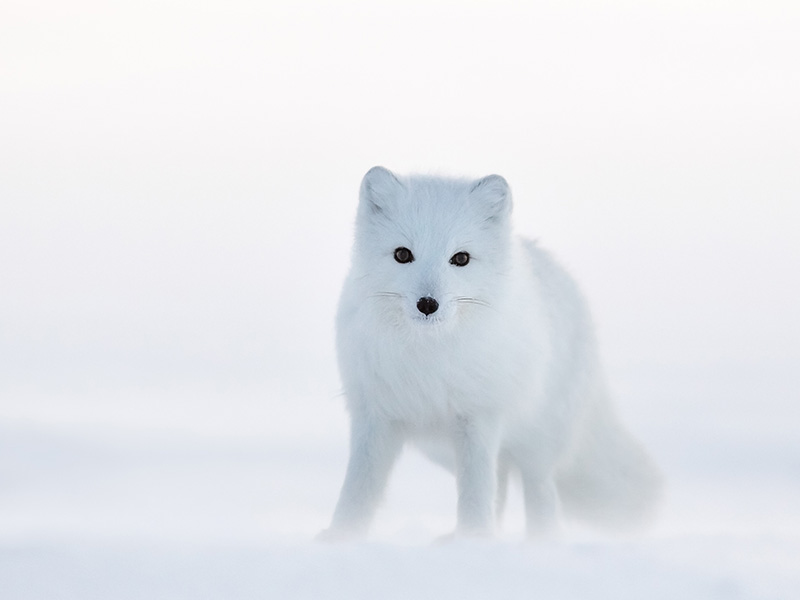 The magnificent musk ox is not native to Wrangel but was introduced decades ago from Canada, although their ancestors did indeed live on the island. Seen in their herds grazing together, these graceful animals with their thick brown/black fur make for a fine addition to the Arctic safari. 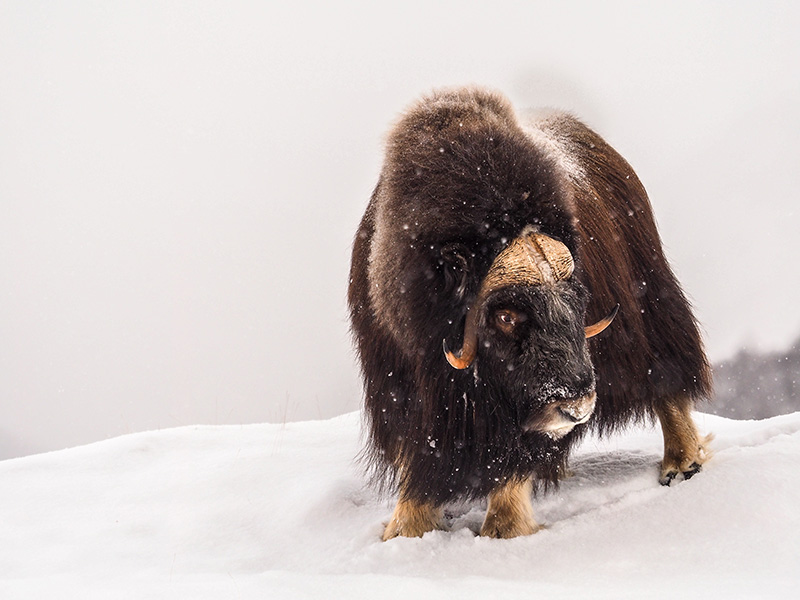 We arrive by ship and circumnavigate this sanctuary island on our expedition, so our final creature in this safari resides in the icy Arctic Ocean that wraps around Wrangel, the Beluga Whale.

Beluga pods can make up hundreds of whales in the shallow coastal waters of the region and our ship has the perfect viewing platforms and zodiac options to capture these beautiful marine mammals. Also known as the White Whale and Sea Canary, due to their ghostly appearance and high-pitched calls, the Beluga Whale is the last animal on our safari. 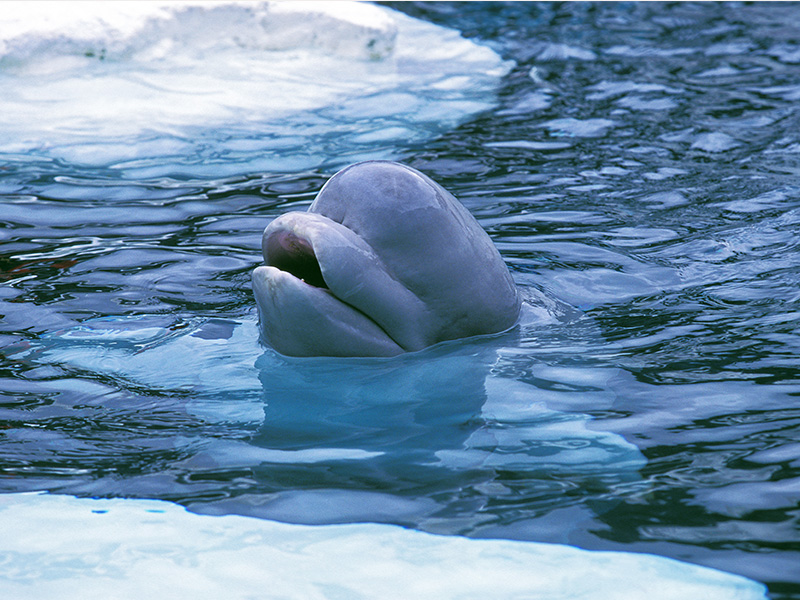 Outside of our Arctic safari ‘Big Five’, it should also be mentioned that Wrangel Island is home to much more wildlife. It is also the breeding ground for numerous bird species and the only Snow Goose nesting colony in Asia.

In fact, Wrangel is the northernmost nesting ground for more than 100 migrating bird species. These include Peregrine Falcon, Snowy Owl, long-tailed skuas and even tiny hummingbirds that have likely been blown to Wrangel from other lands.

Aurora Expeditions is operating two voyages that visit and circumnavigate Wrangel Island in 2022, both roundtrips from Anchorage in Alaska. Departing on 19th July or 16th August these 16-day expeditions will sail on our brand-new expedition ship, Sylvia Earle, which has been designed specifically to visit such destinations, and include hotel stays, charter flights and savings of up to 25% off brochure fares.

We also have photography instructors on board to help you capture this Arctic ‘Big Five’ too! 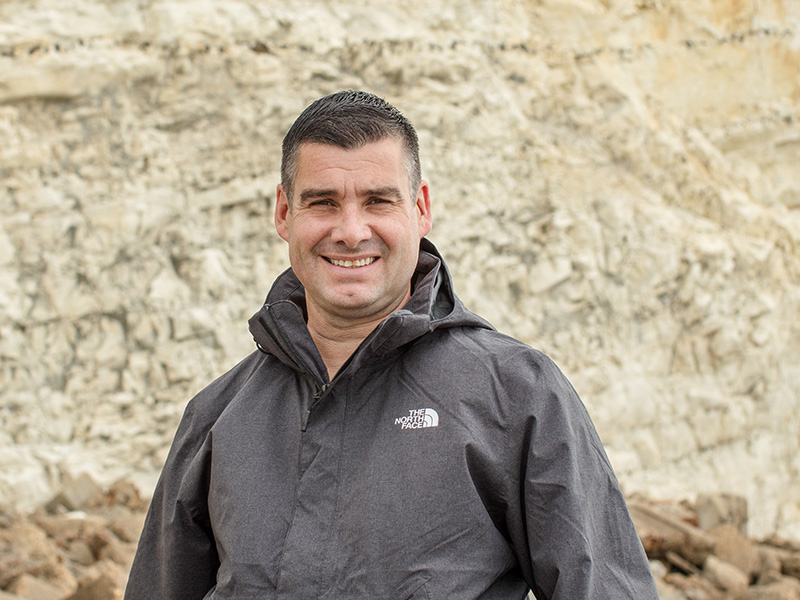