OCEAN ATLANTIC
Home Destinations Albatros Expeditions Ocean Atlantic
GET IN TOUCH
Enquire About Polar Routes
BOOK A CALLBACK
Fill out your details below and we'll arrange for a travel specialist to call you at your preferred time
CALL US
Mon to Fri: 9am-5:30pm
Sat: 12pm-4pm

Newly renovated in 2016, Albatros Expeditions' Ocean Atlantic is a ship purpose-built for expedition cruising in the polar regions, and one of the strongest ships operating in the Arctic and Antarctica. Her powerful engines are designed for extreme voyages, allowing her guests the opportunity to both witness and get up-close to the incredible polar wildlife and the regions' awe-inspiring scenery.

This polar vessel has an elegant interior and can accommodate up to 198 passengers. She was built in 1985 and underwent an extensive rebuild in 2010. Ocean Atlantic features many common areas, from the theatre – where the expedition team will host presentations and workshops about the different destinations you’ll explore, to the sauna – a fantastic place to relax and rest after a full day exploring the beautiful surroundings. All areas, from the observation deck to the bars and restaurant, are designed so as to optimise views of the incredible surroundings. The restaurant provides a 4-star international cuisine and features large windows from which to admire the spectacular views whilst dining. Each stylish cabin has an individual bathroom, phone for internal calls, in-room temperature controls and a TV.

The expedition team organises a series of daily Zodiac excursions and shore landing activities to bring guests closer to the natural surroundings. This will be an exciting adventure for any traveller wishing to discover the pristine wildernesses of the Arctic & Antarctica.

Polar Specialist Ben Rowley says; "For a very affordable ship, the Ocean Atlantic punches well above its weight. It’s physically very large, and with just 199 people on board there’s a lot of space per person. On the top of the ship, there’s a massive open deck with 360-degree views which I loved. Cabins are all very well appointed and surprisingly large. It’s a great ship for those on a budget and you won’t be disappointed."

Search all Cruises on Ocean Atlantic 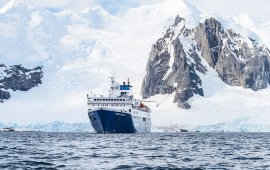 Send an Enquiry Book A Callback Call Us

From your first booking with us, you’ll become a member of My Routes Rewards and begin collecting points for every holiday you book!

We'll compare a huge selection of expedition ships, cruises and operators to find your perfect cruise.

Our prices are amongst the best you'll find, plus look out for Polar Routes exclusive offers!

As supporters of the UK Antarctic Heritage Trust, booking with us helps support the work of the trust within Antarctica.

All our holidays are ATOL protected (11104), for your complete peace of mind.

More About Us
Send An Enquiry
Enquire About OCEAN ATLANTIC