With our flexible booking terms, you can Relax & Book with confidence - Read More
Walruses en masse
Home Travel Inspiration Walruses en masse
GET IN TOUCH
Enquire About Polar Routes
MAKE AN APPOINTMENT
Fill out your details below and we'll arrange your appointment with a travel specialist
CALL US
Mon to Fri: 9am-5:30pm
Sat: 12pm-4pm

The message comes over the tannoy to start getting ourselves ready to go out and see walruses for the first time on the shores of Svalbard. Walruses are not an animal that are probably on most people’s list of favourites but never mind we are in the Arctic and that’s where walruses can be found so, on with the gear and another clamber onto the zodiacs. After a trek across the snow the leaders halted and waited for those of our party who had been straggling along at the back to catch up. Strict instructions were now issued as to the regulation distance that must be maintained between us and the, as yet, unsuspecting walruses who had not been notified of our company. Silence was also required as we slowly crept forward to the ‘viewing point.’ This revealed atotal of three walruses who continued to remain completely oblivious to our presence and showed no inclination whatsoever to pose for the benefit of the photographers amongst us. But never mind, at least we could strike walruses off of our lists of ‘ must see in the Arctic’ and some had the photos to prove it so back we trekked under a glorious blue sky which left the snow glistening all around us, as we made our way back to the zodiacs. 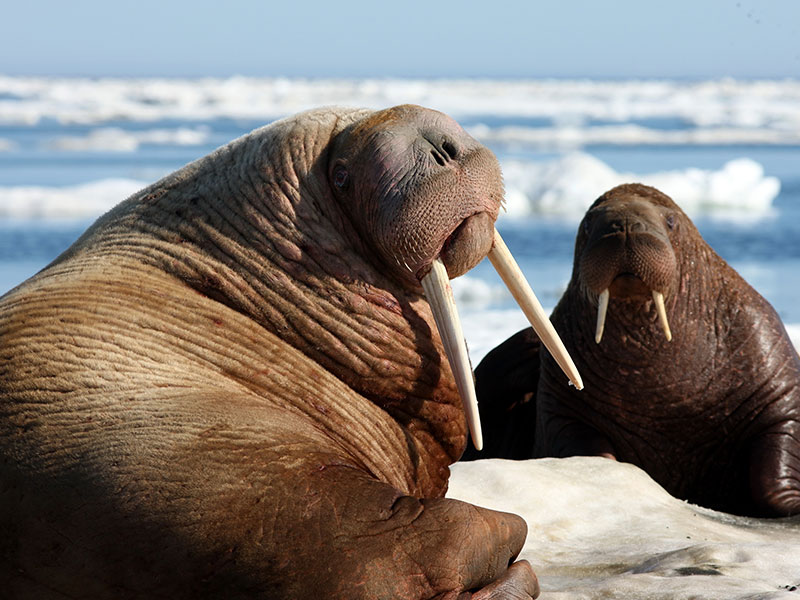 The next day, another outing, with no particular purpose other than to enjoy being out and soaking in more of the amazing scenery all around us. Suddenly turning in a different direction to the one we had been pursuing, we were rewarded with the most amazing sight; an entire beachful of walruses, all lounging about in the manner of the most dedicated couch potato. Forget their standoffish relatives of yesterday, this was quite obviously the must go to walrus party of the year. Here were the babies and their esteemed and venerable grandparents and possibly great grandparents together with all the generations in one enormous huddle of, to put it frankly, blubber! It really was an incredible picture as every so often one of them would decide to make a change in his or her position requiring much heaving and hauling and waving of flippers and a total disdain for the comfort of others, until they were satisfied that they had achieved maximum comfort in which to resume their soporific state. And as for the grunts and groans that went on, which one can only assume was the equivalent of small talk and which would not have disgraced the moans and groan of an entire army of sufferers from arthritis and similar chronic ailments. And as for the smell! Now that was something none of us who were new to the Arctic had bargained for,  but for the uninitiated it was a ‘pong’ quite unlike and remarkably more powerful than any other ‘pong’ we have ever had the misfortune to encounter.. This was quite decidedly not a scent to be extracted and bottled for sale in some high class perfumery. 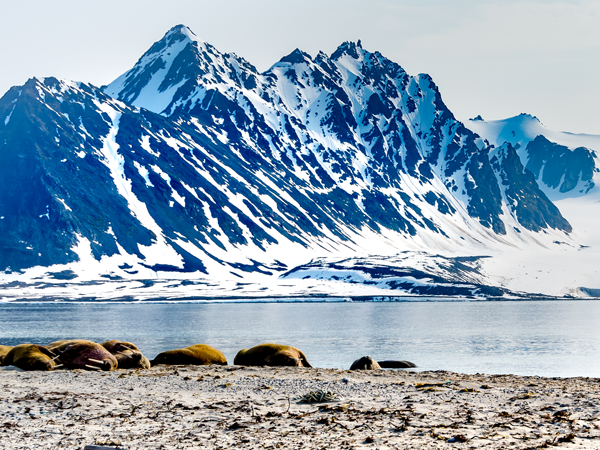 But no matter now, we had well and truly been rewarded with walruses en masse and again there was a plethora of photos to prove it. With a certain relief ( the smell quite something) we left the walrus gathering to their social get together and made our way back to the mother ship for our own evening get together, which,it has to be said, was a lot more lively than theirs!

To book your cruise to Svalbard get in touch with one of our Polar specialists today on 020 3666 1118, or submit an enquiry here.