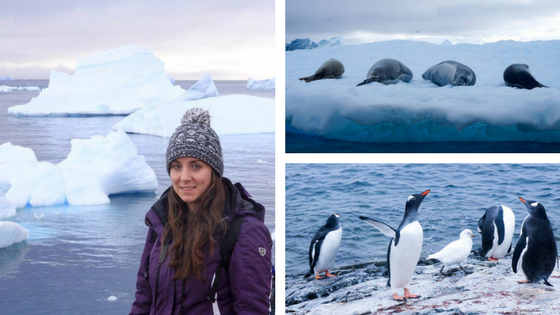 I was lucky enough to sail to Antarctica in March aboard the M/V Ortelius, on her final voyage of the season to cross the Polar Circle. Carrying just 116 passengers, it is one of the smallest, most expedition-focused ships currently operating in Antarctica, and I couldn't wait to get on board and familiarise myself with my surroundings for the next 12 days.

From the initial bag-drop at Ushuaia pier to the final transfer back to the airport, the operation ran smoothly. Knowing that I would be spending the morning of embarkation on an excursion to Tierra del Fuego National Park, Latin Routes' partner company in Argentina organised for my suitcase to be collected from the hotel and delivered to the pier, where the expedition staff were loading luggage onto the ship. When I embarked in the afternoon, my suitcase was ready and waiting in my cabin.

After meeting my roommate and having a look around the ship, we were welcomed on board with a cocktail. When we were comfortable, the staff, including the captain, expedition leader, an historian and a marine biologist, introduced themselves to us. They came from all walks of life and their breadth of knowledge and experience filled us with confidence.

First on the cruise agenda was to cross the notorious Drake Passage in order to reach the Antarctic Peninsula. The passage is the point at which the Atlantic and Pacific Oceans meet, and can be one of the most treacherous crossings on Earth. However, if luck is on your side, you may encounter what is known as the 'Drake Lake', with calm seas bearing you to the peninsula. Despite a (rather morbid) desire to experience the 'Drake Quake', I admit I was relieved that we reached the peninsula through relatively calm waters (a 3/10, according to Jerry, the diving guide).

Our days in Antarctica were filled with a mixture of zodiac cruises, landings and lectures. For those with an even more adventurous streak, polar diving and kayaking were available as an extra (dependent upon experience). One of the most memorable landings for me was a visit to Neko Harbour, where we disembarked via zodiac and had the opportunity to spend time amongst Gentoo penguins before a moderate hike uphill. The views from the top were truly amazing; deep blue waters scattered with sculpted icebergs, craggy mountains covered in snow and penguins dotted all around the bay. 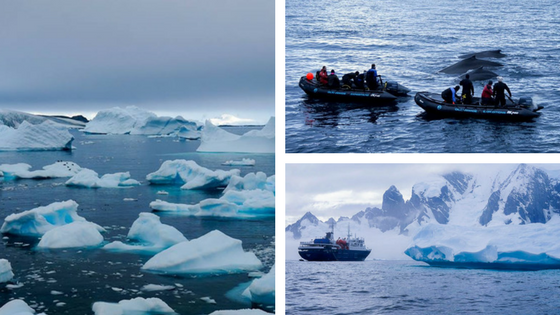 Crossing the Polar Circle was also a highlight, with the captain sounding the horn to herald the event, and guests cheering as we crossed the most southerly latitude line in the world. The advantages of taking one of the polar circle voyages are not only limited to ticking off another bucket list experience. By choosing one of these slightly longer voyages, you spend a total of 5 1/2 days exploring the South Shetland Islands and the Antarctic Peninsula, as opposed to the 3 1/2 days that the classic Antarctica voyages offer. With four days at sea on both options, many consider the polar circle voyages to be slightly better value for money. You also have the opportunity to see some spectacular scenery further south, which the shorter voyages do not have time to reach.

The Wildlife of Antarctica

One of my main hopes for the trip was to see the Antarctic wildlife, and I certainly wasn't disappointed. During the voyage, just some of the species we saw included humpback whales, fin whales, orcas, penguins (chinstrap, Gentoo and Adelie), fur seals, Weddell seals and even a leopard seal, plus wandering albatross, skuas and blue-eyed shags. Some of these sightings were at just a few metres, including the amazing moment a small pod of curious humpback whales approached the ship for a closer look, while we were in zodiac boats, ready to head to the shore.

On the return journey to Ushuaia, I had time to reflect on my incredible experience aboard the M/V Ortelius. This was one of the most awe-inspiring locations I have ever visited, with landscapes and wildlife I had only dreamt of seeing first hand. The trip was made even better thanks to the Ortelius' excellent guides and crew, fantastic meals and comfortable cabin. I would highly recommend this ship and voyage for an unforgettable experience to Earth's final wilderness.

The Arctic vs Antarctica

If you're unsure as to which end of the Earth you should visit next, then read our quick Arctic vs Antarctica comparison. What you can expect to see in each place, as well as the best time to visit.

A longer cruise than our Classic Antarctic itinerary, you'll head further south than most people on Earth ever have, with the aim of crossing the Antartic Circle. Jaw-dropping scenery and wildlife including adelie and gentoo penguins will leave you captivated.

The 6 Types of Antarctic Penguin

>Let’s be honest. A once-in-a-lifetime trip to Antarctica isn’t about the bragging rights or quenching the thirst of your inner explorer - it’s all about the penguins. Whether or not these amazing two-legged, flightless creatures are the only reason you want to visit the frozen continent

See the best of what the Antarctic has to offer for yourself with this incredible Polar Cruise.

Enquire About Crossing the Polar Circle
About Us


Why book with Polar Routes?

Sign up to our monthly newsletter and as a thank you, we’ll send you an exclusive discount code to use on any Latin Routes holiday.

Enter your email below to get started. Don’t worry, we never share your information with anyone else.